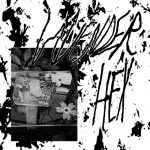 On Lavender Hex: Track 3: The Sorrow Song is Ghosting the Theatre.  Track 10: Out of this World. (words below)

On Bunch of Flowers: Track 15: Routes Out. (words below)

The Sorrow Song is Ghosting the Theatre

I am supposed to render myself adapted
but the sorrow song ghosts the theatre
lifetimes blinkered to self interest not the common good
I am supposed to me better, to me live well, to me —
travel agents, hot yoga and purchases; ginseng, notebooks
another pair of shoes

but the sorrow song is ghosting the theatre
it’s underneath; a quiet desperation
masked by the talking and talking, the diversions
of domesticity; fridge insurance, SIM cards and the
relentless routing of mono-crises
to deflect away from the systemic monopoly of power —
another war, a viral pandemic
immobilise us shrunken impotence, our sight lines cluttered
our mouths stuffed with media, to not name it and refuse it

and reinvent
and reclaim

the unjust, the violent
the vacuous calling itself democracy but

the sorrow song that is ghosting the theatre
refines our homing instinct, will not participate, lights behind
costume, set and script showing it for what is is uninhabited
by acquiescence

Out of this World
for Soraya

What is the likelihood of this coming to pass?
There is a question about viability.

And how many will be shortlisted?
10 groups of 4.

How long will the journey take?
Between 7 to 8 months

And will they return?
No, they will die there.

And how will they survive?
They will grow their own food.

And who are the funders?
Reality TV.

And who will be watching?
People in front of their televisions.

And why are you asking?
Because I need someone to help me.

The wide of the Kazakhstani plains, the charred shuttle that seered it’s way
through the atmosphere, crouched, sweating in metal-looped space suits they landed
muscle and bone density mass so sparse, inner ear a-skew they are carried in chairs
across the grasses. Medical teams and journalists surround, he is saying he feels fantastic,
a weak thumbs up, his pale, thin skin, not sure he can see so well, his eyesight blur
all that cranial pressure at zero gravity six months gazing down at the earth and back
don’t forget to look behind you they told him into all the darkness and the stars

Someone from the press calls Tim, how are you, how do you feel? And, seated,
a nurse wiping his re-entry sweat off his face in the sunlight, and feigning solid
in such crazy disorientation tells us Just truly elated… I mean just the smells of earth
are so strong… it’s just wonderful to be back… the fresh air is lovely.

It’ll be us interlocked fingers
and woven into each other

warm by that fire in the
sweet heather

taking the night sky in to us

the galaxy ours
the milky way turning Jupiter
heraldic in Virgo

There will be a moon waxing in Cancer
then the dawn come in the east —
whitening out, cool

bringing us back down,
damp dew
the embers
glowing red — the daybreak streak
bleeding the horizon
as the sun fires up
and we know it will be another hot day

and we will swim together

I am leaving the buildings

their thick relational cluster;
mono-species piled on top of each other
the street lattice and cars and car air
and the hard racing roads.
I’m taking a route out east to the marshes
the pylons there pin-bolts in the landscape
leashing the earth with voltage, beneath
the elderberries lie dark purple crush
in the gravel path, the wind bevelling
the water that gently pulses reeds, lilies
a plastic bag, a tennis ball.
It’s a strange portal:canal, cables, reservoirs
its own peace though the corridor is at odds
with wilderness
—nature reserves, plaques and signposts
a container to free from yet.
The city’s edge teases between tree lines
rubble heaps, process plants, gas cylinders
a train whines on a track, the heat of the sun
opens my pores then there is the cool
contraction of cloud cover.
Eventually it’s sweet and green
all noise has folded away behind
I stop and lean on a wooden gate
listen to the quiet expanding.